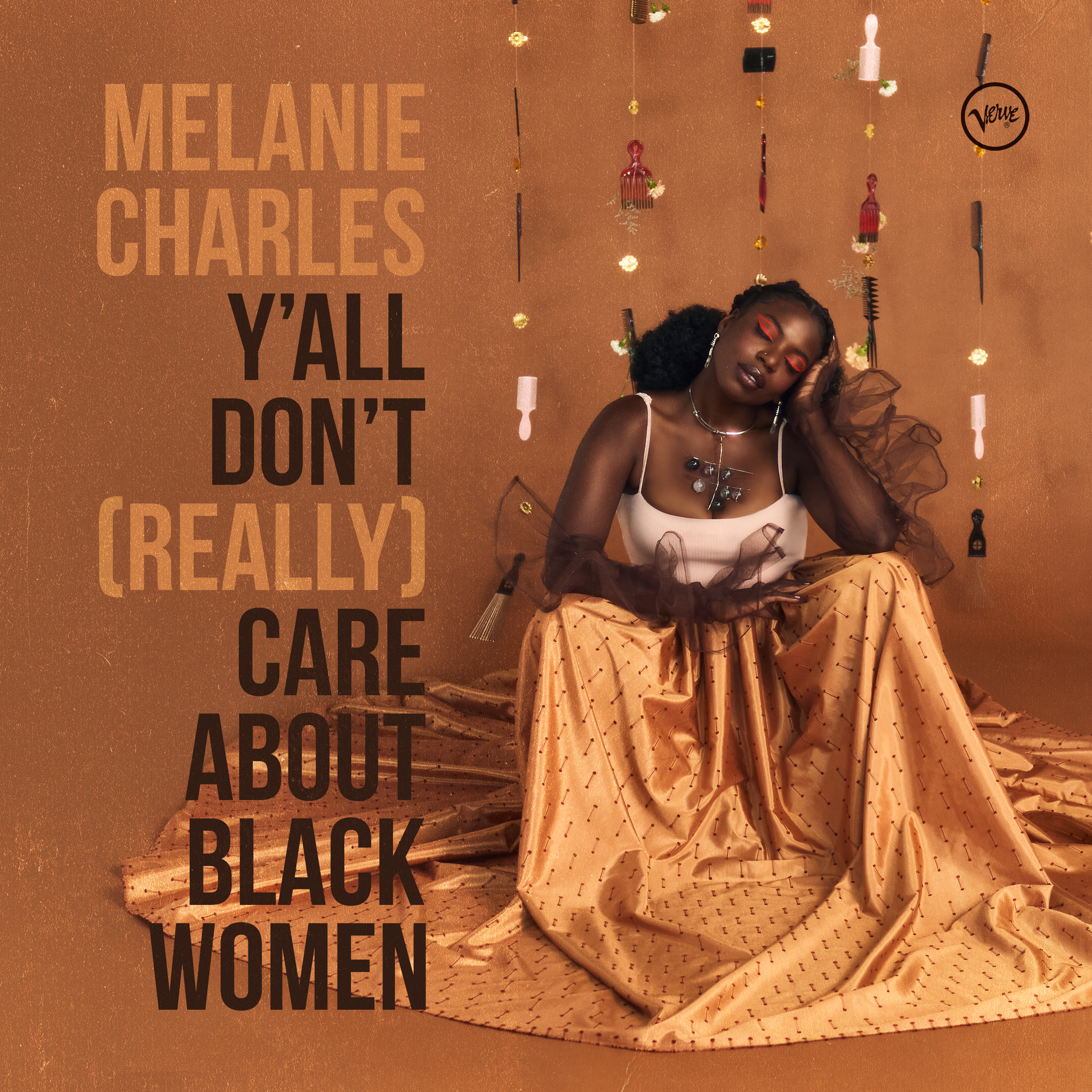 There are very few artists whose sound can capture the sentiments of a generation. The Brooklyn born and raised, Melanie Charles, is one of these artists. Over the past few decades, she has made a name for herself through dynamic engagements with jazz, soul and R&B. Her bold genre-bending style has been embraced by a range of artists including Wynton Marsalis, SZA, Mach-Hommy, Gorillaz and The Roots. In 2021, she appeared on NPR’s Tiny Desk and stunned with her eclectic style. Through it all, she has remained committed to making music that pushes listeners to consider new possibilities—both sonically and politically. “Make Jazz Trill Again,” a project that she launched in 2016, demonstrates her allegiance to everyday people, especially the youth and is focused on taking jazz from the museum to the streets. “I love jazz, I really fell in love with it deeply. But I was interested in young people interacting with it,” Charles says. The album Y’all Don’t (Really) Care About Black Women is reflective of Charles’ tremendous versatility and imagination as an artist but of also her deep care for community.

Charles’ initial approach to the album was simple—to find music in the Verve catalogue that spoke to her. As a Verve remix project, with Y’all Don’t (Really) Care About Black Women she set out to take this group of songs and breathe new energy into them. She was immediately drawn to the rapturous voices of Billie Holiday and Sarah Vaughn who inspired her to record arrangements of “God Bless the Child” and “Detour Ahead.” By the time she was ready to move forward with recording the rest of the album, the world had transformed into a very different place. When the pandemic hit, Charles was faced with a new set of concerns. She no longer had access to the same resources and was forced to make the album from home. Charles was not discouraged. “This is at the center of our experience as brown and Black people, making something out of nothing,” she says.

The remainder of the album was recorded during the summer of 2020 while the pandemic continued and Americans were in the throes of a racial reckoning sparked by the deaths of George Floyd, Breonna Taylor and others. Taylor’s death, in particular, had an impact on Charles’ creative process. “I was rudely reminded that Black women are and always have been undervalued, uncared for, unprotected and neglected. I decided to focus on songs written and or sung by the Black women who paved the way for me,” says Charles. Y’all Don’t (Really) Care About Black Women is a love letter to the un¬heralded labor of Black women. At the same time, it asks listeners, as they consume the artistic pro¬duction of Black women—the likes of Ella Fitzgerald, Sarah Vaughan, Abbey Lincoln and Di¬nah Washington and others—to be accountable to and care about them as well.

Although Charles may be new to some, she has held a long spanning relationship with music that goes back to girlhood. She was raised by a Haitian mother in Brooklyn where the sound waves in their home was filled with artists like Johnny Hodges, Frank Sinatra, Chaka Khan, Anita Baker, John Coltrane and Nat King Cole. She attended the famed arts high school, LaGuar¬dia High School for the Perform¬ing Arts where she studied flute and vocals. Her early life was full of stage performances; as a kid she participated in musical the¬ater, pageants and talent shows in New York City. Eventually, she landed at the School of Jazz and Contemporary Music at The New School for college where she met artists like singer, song¬writer, and record producer Jesse Boykins III and alto saxophon¬ist Lakecia Benjamin. Perhaps better known as a singer, Charles has earned her title as a bonafide flautist. Her playing adds vibrant swaths of color and emotional texture to her music.