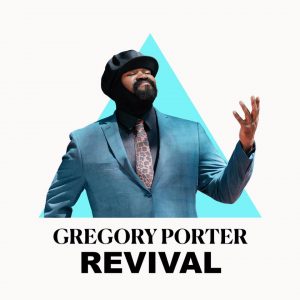 Gregory Porter is back with his new single REVIVAL which is out on January 16th to be followed up with his brand new recording ALL RISE to be released April 17th 2020.

You probably felt the earth rumbling! Gregory’s first single of his upcoming album ALL RISE is released with a stunning video!!

ALL RISE  will be his sixth studio album, marks a return to Porter’s beloved original songwriting — heart-on-sleeve lyrics imbued with everyday philosophy and real-life detail, set to a stirring mix of jazz, soul, blues, and gospel. Produced by Troy Miller (Laura Mvula, Jamie Cullum, Emili Sandé), the set also represents the evolution of Porter’s art to something even more emphatic, emotive, intimate, and universal too.

„Yes, you could say that I went big,“ says Porter about his latest, which combines the talents of his longtime loyal bandmates, a handpicked horn section, a 10-member choir, and the London Symphony Orchestra Strings. „But, quite frankly, the way I write in my head, it all happens with just voice and piano first, and it’s built up from there. It feels good to get back to the rhythms and the styles and the feelings and the way that I like to lay down my own music from start to finish.“

REVIVAL seems to be  straight-up gospel. This what we’ve heard in church. When somebody caught the Holy Ghost this was the beat,” says Gregory of “Revival,” which was co-written with the album’s producer Troy Miller( produced Laura Mvula, Jamie Cullum, Emili Sandé). “Troy knows the importance of message in music, but the message that we both agreed on with the lyric was what I believe in, that renewal of the spirit and the energy. It’s both heavenly and earthly. You don’t have to be a believer to understand revival and renewal, starting all over again afresh. For me, it’s the message of walking into this life and having some fear and some self-doubt, and at the point that you grab onto something that you know is real, the truth. Once you can grab onto the truth then this fearlessness comes.”

While the strings were recorded at Abbey Road, the core of ALL RISE was made in two locations: in Los Angeles at the legendary Capitol Studios just a couple of hours from Porter’s Bakersfield home; and at a cozy studio in Paris‘ Saint-Germain-des-Prés quarter, a historic hub for literature and jazz.

In fact, Porter himself wrestled with this album’s direction. Like many concerned citizens these days, he’d found himself obsessed with the politics of the day, every new song morphing into a response to the powers that be. It was unhealthy, and exactly the kinda thing those powers feed on: attention, influence, anger. So Porter scrapped nearly all of that, looked inward, upward, and around him, and arrived at a new raison d’être found in the title, ALL RISE. „We hear that phrase when presidents or judges come into the room,“ says Porter, „but I’m thinking all of us rise — not just one person being exalted. We are all exalted and lifted up by love. This is my political thought and my real truth. It comes from my personality, my mother’s personality, the personality of the blues, and of black people. It’s this idea of making do with the scraps, of resurrection and ascension, and of whatever the current situation is, it can get better through love.“

Drop the needle on „Revival“ and just try to pretend you aren’t lifted by the spirit no matter your personal faith or affiliation. Once again, Porter cuts through the noise of genres and the mess of life to reach us all where we live: the heart.