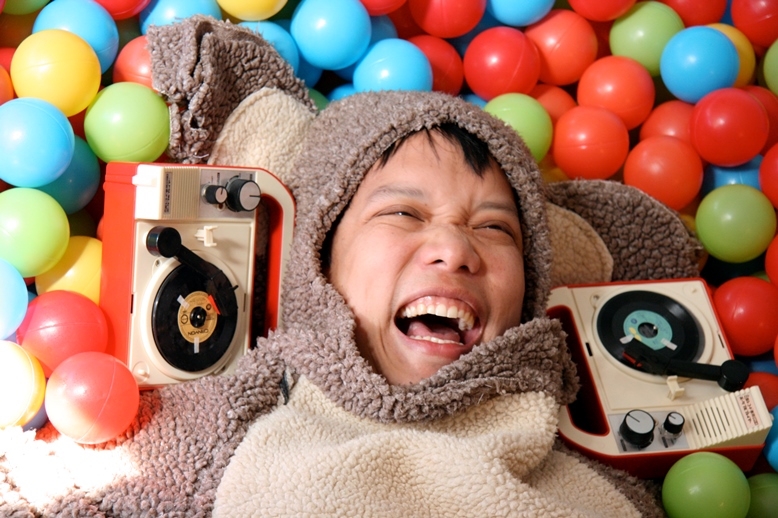 Anyone who has ever seen the Canadian Kid Koala on his turntables knows how much heart’s blood and love this musician puts into his doing. His live gigs are especially amazing because this man knows what he is doing in every second. Currently he is on the road with different projects:
Combine one piano, six space pods, seven turntables, and 250 sets of headphones with an audio science fair/gallery. What do you get? Fun for the whole family!

Nufonia Must Fall Live Action is a live multi-disciplinary adaptation of Kid Koala’s graphic novel of the same name. In this live interpretation, the story is told through real-time filming of miniature sets on Go Pro cameras. It is live scored on piano, strings and turntables by Kid Koala in collaboration with the Afiara Quartet with production design by K.K. Barrett and art design by Mikey Please.

In his latest live experience Kid Koala’s Satellite Turntable Orchestra the master DJ empowers his audience. This is participatory music on a high level, with an interactive turntable orchestra in which the listeners become the composers. The audience sits at stations equipped with a turntable, an effects box and a small crate of colour-coded vinyl records. The crowd is an integral part of the show, accompanying Kid Koala; together they create an „ambient vinyl orchestra“ and meld their personal choices into a body of sound.

His latest studio album has been released in January  2017: Music To Draw To: Satellite is an uncharted musical journey for the legendary scratch DJ, producer, and composer. Kid Koala’s fifth studio album is an expansive work of ambient electronic soundscapes and chilling ballads sung by Icelandic artist Emiliana Torrini. Created during the gelid Montreal winter, its eighteen movements tell a tale of discovery and loss through the lens of lovers separated by an early space mission to Mars. An album of many firsts for Eric San, this inaugural volume in the Music To Draw To series features Kid Koala collaborating with a vocalist, writing lyrical poetry, and producing and performing all instruments. Satellite is the renowned audio-collagist’s first non-sample-based record, instead using an array of synthesizers, keys, guitars, strings, turntables, noisemakers and San’s inventive recording techniques to lay out this heartrending musical story. The output is in stark, beautiful comparison an ambient masterpiece: over 72 atmospheric minutes of stardust settling over Kid Koala’s trove of turntables and sentiment.

His latest release is Floor Kids, the breakthrough breakdance battle video game with original music by legendary scratch DJ and producer Kid Koala. Featuring 42 tracks and 71 minutes of original instrumental hip-hop and break music from the game, the Floor Kids Original Video Game Soundtrack is a timeless journey across every era of the sound, cycling through silky 70s funk, thumping 80s 808s, granular 90s 12 bit, and 00s synth funk. An original concept by animator bboy Jon Jon and Kid Koala, Floor Kids has captured the essence of what makes breaking an art form unlike any other, blending together sound, style, and movement in a radical blast of freestyle expression.