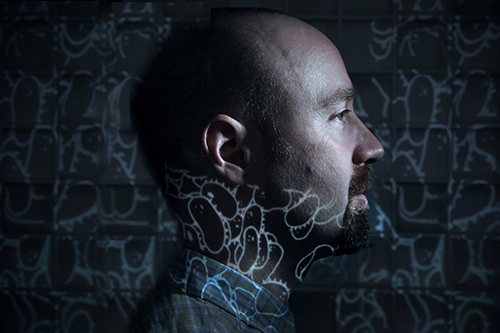 As a producer he makes music that draws on these influences, with a large dose of cheek and good humor. His cartoon drawings illustrate gig flyers, record sleeves and CD covers, and usually accompany him at gigs as live animated visuals.

A regular on the Manchester scene through ’94-’95, he released a string of 12”s on Rob’s Records subsidiary Pleasure, as well as sides for Echo Drop, Grand Central & Cup of Tea. His work for Grand Central with Mark Rae inspired some four-deck club performances, including friendly “battles” with DJ Food, which introduced him to the Ninja Tune fold. Gigging across the UK and Europe, Mr. Scruff signed to Ninja Tune in 1998.

His debut album Keep It Unreal arrived a year later. Trouser Jazz (2002); the epic mix CD Keep It Solid Steel (2004); and Ninja Tuna (2008) cemented Scruff’s rep as a premium freaker of frequencies, the latter featuring collaborations with the likes of Quantic, Danny Breaks, Alice Russell, Andreya Triana, Pete Simpson, Kaidi Tatham and Roots Manuva. A fistful of EPs and singles populated 2009-2013 including Wobble Control (2011), Feel It / Bounce (2011) and Be The Music (2012).

In 2010 Big Chill Festival invited Mr. Scruff to host his own tent, testament to his inimitable raw dancefloor magnetism as are his regularly rammed-to-the-rafters Keep It Unreal sessions at Band On The Wall (Manchester) and KOKO (London).

After receiving a mighty nudge by the giant elbow of Ninja, the majority of 2013 was spent in the studio recording his album Friendly Bacteria, featuring Denis Jones, Matthew Halsall, Phil France, Vanessa Freeman & Robert Owens which came out in May 2014. Gondwana re-release his subtile and cinematic debut LP The Swimmer earlier in 2017 and Mr Scruff shared a pair of remixes for Phil France’s synth-laden album cut, Joy of Brass. Two variations to choose from; the lead track is a fizzy, wriggly 2-step slo-mo rework while a bumpy, low-slung dub cut adorns the B-side.
To Celebrate 20 years since the release of the album Keep it Unreal, Ninja Tune have released this lovely green vinyl version which comes with a pull out poster of all 200 flyers of his Manchester party.

Also because of the 25 years anniversary of K7! Record Scruff was compiling a fantastic DJ KICKS.